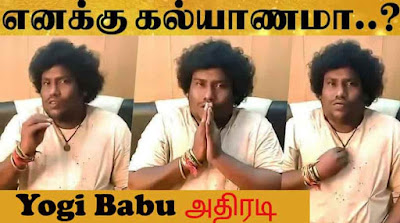 Recently some news spread about comedy actress yogi babu and junior artist Sabitha rai will be getting married soon. Yogi babu one of the most top comedy actors in the Tamil cinema industry; he is recently acted in Vijay Bigil Movie, and also he acted in Rajinikanth 'Darbar' movie will be released in 2020 Pongal festival.
So many fake twitter accounts spread the fake news about yogi babu marriage. now Yogi babu officially announced the statement about his marriage. You can see that yogi babu tweet in below.

Please Avoid The Fake Ids Who Are Misusing It In My Name 🙏🏻 This Is The Only Twitter Id I Am Using !