TNPSC Group 2, 2A Unit 8 Study Material: In 2019 TNPSC Recruitment board made changes in the Tnpsc group 2 exam syllabus. They released mixed tnpsc group 2a and Group 2 syllabus. 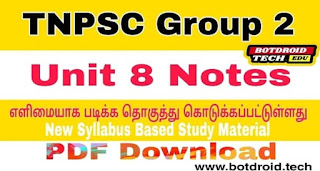 This Unit 8 Note was preferred from both old and new syllabus. We covered all topics from group 2 plan, so you can study efficiently.